The modernisation of European airspace took a major step forward today with the appointment of a unique aviation industry partnership to coordinate and synchronise €3bn worth of upgrades to the continent’s air traffic management infrastructure.

The European Commission has tasked the SESAR (Single European Sky ATM Research) Deployment Alliance, an unprecedented cross industry partnership made up of four airline groups, operators of 25 airports and 11 air traffic control providers, to plan and coordinate a wholesale modernisation of European airspace, making it fit for the 21st Century. It has been appointed to the European Commission-mandated role of SESAR Deployment Manager. 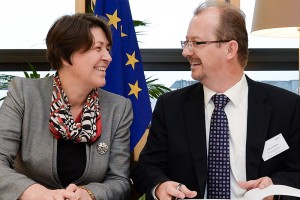 Europe’s fragmented airspace structure is inefficient and costs more to operate than equivalent regions around the world. The European Commission’s Single European Sky initiative, of which SESAR deployment is an important pillar, will improve efficiency, lower delays and raise environmental performance.

The modernisation is not only vital for the future competitiveness of Europe’s aviation industry, but for the wider health of its economy.  Aviation supports 11.7 million jobs in Europe, equating to one person in every 40 people employed, generating €452 billion per annum of European GDP.

However, with air traffic forecast to increase by 50% by 2035 to approximately 14.4 million flights, Europe’s aging air traffic control technologies and infrastructure will begin to undermine its position as a leading aviation hub if nothing is done to address it.

The SESAR Deployment Manager will ensure that new technologies and solutions that have already been tested and validated through the SESAR Joint Undertaking are delivered into everyday operations across Europe, delivering significant benefits to airspace users and the environment. The SESAR Deployment Alliance, comprised of the A6 Alliance of ANSPs, the A4 airlines and the SESAR-related Deployment Airport Operators Group (SDAG), will coordinate and synchronise for an initial 6-year period the work of ensuring Europe maintains its competitive edge.

Commissioner Violeta Bulc said: “Today’s agreement is a great achievement for EU aviation, forever changing Europe’s air navigation system, making it smarter, cheaper, greener, and safer. It also marks an important step towards the accomplishment of the Single European Sky. These projects will translate into economic benefits for the whole EU with a contribution of over €400 bn to its GDP, the creation of over 300,000 new jobs and saving 50 million tons of CO2 emissions.”

Richard Deakin added: “Today is a landmark day both for the Single European Sky and for European aviation. This collaboration shows how committed all of us in the industry are to working together to modernise Europe’s airspace. We are all passionate about ensuring Europe’s aviation industry remains successful and this is a major step forward.”

Massimo Garbini, the former CEO of Italian ANSP ENAV, has been appointed Managing Director of the SESAR Deployment Alliance. He commented: “We are pleased that the Commission has selected this unique cross-industry collaboration to drive the essential ATM modernisation of European airspace. I guarantee that we will do everything we can to deliver the results Europe needs”.

The Single European Sky is one of the European Commission’s main transport initiatives, designed to improve the way we manage Europe’s airspace so as to minimise fuel burn, reduce unnecessary costs and make the most of Europe’s airport capacity.